What Did I Know of Love's Austere and Lonely Offices 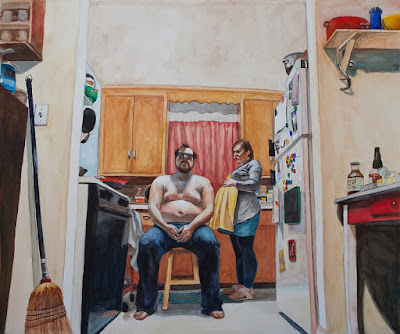 This photograph for this painting was taken on my 30th birthday.  It was just over two weeks before my son was born.  I am seen here with my wife, at this point in our marriage we had only known each other for a year and a half (we met at the end of September and Got married at the beginning of June 8 months later, and got pregnant a month after that). This painting is meant to capture the heaviness of the situation and the conflicting feelings that I was experiencing at the time.  A new child was for me exciting and terrifying, it marked a new chapter in my life and in many ways spelled out an end to my freedom.  So I was filled with both eager anticipation and a sense of regret at the situation.  A bizarre dichotomy but one that is common to many soon to be parents, at least the one's that understand what parenthood entails.  Just to clarify, I love being a father, but I think the trepidation before becoming a parent is common and something that almost no one talks about.  The title of this piece was taken from this poem by Robert Hayden called Those Winter Sundays about a father's acts of thankless love.  This makes me reflect on my relationship with own father and think about what kind of father I want to be.

Sundays too my father got up early
and put his clothes on in the blueblack cold,
then with cracked hands that ached
from labor in the weekday weather made
banked fires blaze. No one ever thanked him.
I’d wake and hear the cold splintering, breaking.
When the rooms were warm, he’d call,
and slowly I would rise and dress,
fearing the chronic angers of that house,
Speaking indifferently to him,
who had driven out the cold
and polished my good shoes as well.
What did I know, what did I know
of love’s austere and lonely offices?

Though I've experimented with, and even taught classes in watercolor before, this is
the first time that I've actually created a fully realized painting using watercolor.  I've documented the process to show the evolution of the piece.  I began by painting all of the shadows on my body blue.  Much of this was covered up in the final image, but I was careful to leave much of it around my neck. 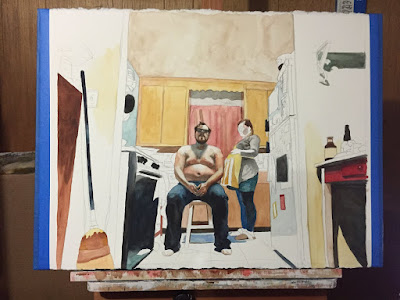 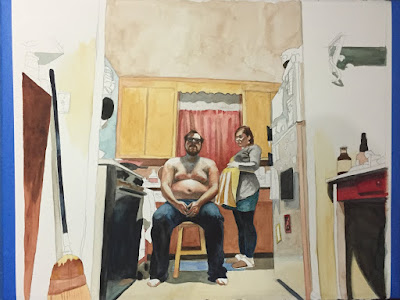 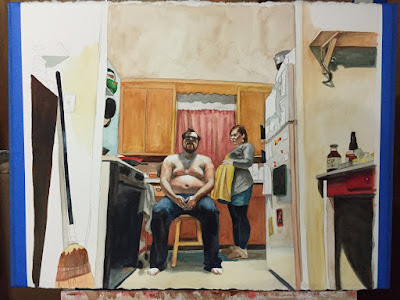 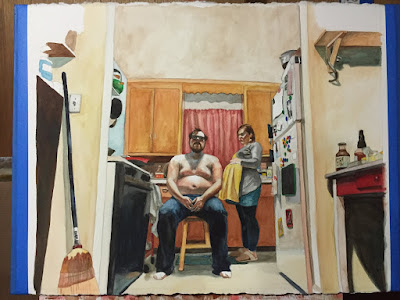 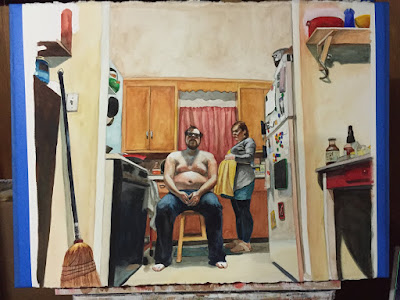 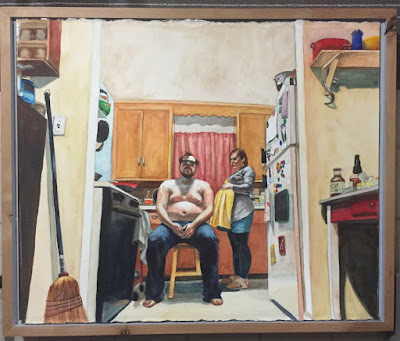 As a quick update, this painting was accepted into a nationally juried show at an art center in Golden Colorado.  It was exciting, however, when I turned in the framed piece (shown above) they said that the frame was unacceptable and if I wanted to piece in the show I would need to reframe it.  Though this was disappointing I opted to just retract the piece from the show, instead of paying a couple of hundred dollars to have it put into a frame that I didn't like.

I only bring it up to highlight part of the stigma that surrounds watercolor as a medium. The reason that my frame was deemed unacceptable wasn't because it was unprofessional, it was because it didn't fit their ideas of what a frame should look like. Many practitioners are mired in the traditions that have kept the medium from being relevant.  I say this, because at the very same time that this frame was rejected I had a drawing on display that was framed identically in an Internationally Juried Drawing Exhibition at a more prestigious art center in Denver, which was by far the most impressive show that I've ever been involved with, and they had no issue with the professionalism of my frame.

I know it sounds like i'm complaining about not being in the show, and yes, I am doing that a little bit, but after that experience it really made me want to make more watercolors, to push the medium into the 21st century.  There are a lot of amazing contemporary artists working in watercolor, but they really don't get much recognition.  It's a beautiful medium and I hope that it becomes more prevalent in the landscape of contemporary painting.
Posted by Benjamin Rogers at 1:53 AM No comments:

Those Born to the Storm Grow Weary of the Calm

I have begun the process of creating a new large scale painting, that was made possible in part by a grant from the Puffin Foundation.  I will be writing more about it as the process continues, but for now, I wanted to introduce the concept.  I was always struck by Francisco Goya's Disasters of War series.  This notion of revisiting the Disasters of War is not a novel one, Jake a Dinos Chapman did a large series directly related to the Disasters of War (sculptures below). 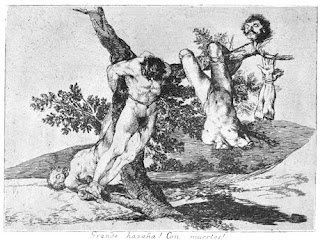 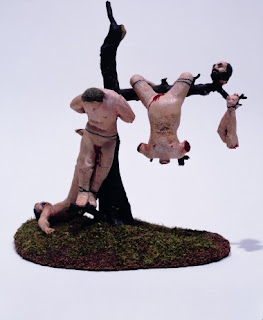 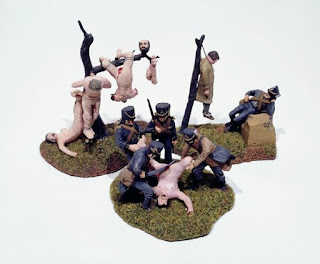 My idea has been developing for about eight years, but I really began to hone it down into a solidified concept in 2014.  Since then, I have been moving, and unemployed, and a new father, and moving again, so my progress has been stalled to say the very least.  However, I am on the precipice, looking into the near future.  About to begin.  It's very exciting.

To briefly explain, my concept stems from the notion of children (particularly young boys) that represent the sensibilities of those who wield great political and military power. Young boys have a habit of turning everything into a gun, or pretending to commit mass murder while emulating a cartoon character or hero of theirs.  Not to mention how they casually practice torture using their action figures.  We all remember how the vicious neighbor Sid tortured his toys like Combat Carl in Toy Story. 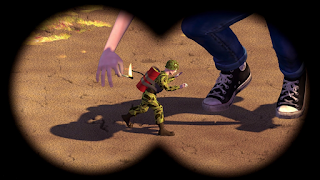 This insight was partially awakened by the birth of my son and my realization of the nature of man.  But I had wanted to create painting from an epic battle scene with action figures since I was in graduate school.  I even went as far as to buy a giant box full of off brand GI Joes in the hopes that I would get around to it while I was there.  I never did.  The issue was that it didn't mean anything to me at that point.  I had no purpose to make such a painting, other than creating a battle scene, but it seemed like a far cry from my work.  It wasn't until my son was born that I really thought about how little boys play, or at least how I played when I was a little boy.  And how Sid from Toy Story wasn't especially sadistic, he just had a great imagination for toy torture.  When I thought about Sid I thought about Goya's Disasters of War and essentially knew immediately how I would handle it.

The process has been kind of slow going.  Again, partially due to many major life changes, but also because of the practicalities of making such a piece.  I have to make it much larger than I normally work.  The vast majority of my paintings are 35" x 42", which wouldn't be large enough to communicate the toys in the proper pose.  I also had other artworks that I had already had planned to do, and some that just kind of came out of nowhere.  But the main reason it has taken awhile to really begin is that I don't want to rush the process.  My wife took the photograph that I am working from over a year ago.  Since then, I have edited into the photo the scenes from Disasters that I will be referencing.  Once I put those in place I recreated the scenes using action figures and other toys and then edited that into the picture in place of the original print.  I am taking time to make the composition works how I'd like it to.  I'm going into this project with the understanding that it will take a year to create.  It is the most ambitious painting I have made up to this point in my career.

At this point I have made the canvas stretcher, stretched the canvas, and applied three coats of gesso.  I only have three more coats to apply and i'll be ready to begin.  The canvas is about 5 feet by 6 feet and BARELY fits down the stairs to go into my studio.  I plan on keeping this blog updated periodically with my progress, so here's the first shot.  Just waiting to be drawn on. 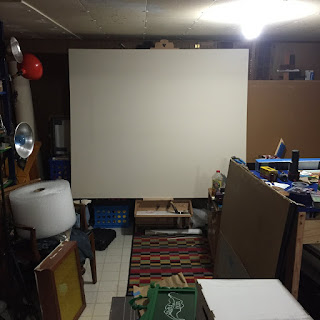 Posted by Benjamin Rogers at 2:04 AM No comments: