The Perfect Romance of High Morality 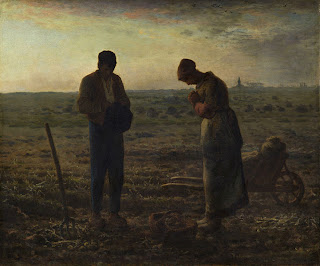 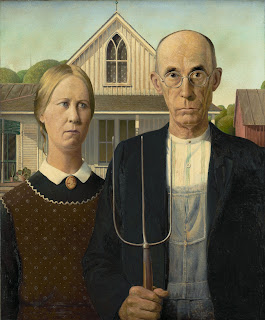 This image was inspired by Jean Francois Millet, Grant Wood, and most notably Jan Van Eyck.  I wanted to do a painting about romance and marriage and love.  Which is interesting because I met my fiancee while I was working on the painting.  This painting was a difficult journey, that took three times as long as it probably should have for a number of reasons.  The first reason is that I needed to restart because my first attempt was awful so after wrestling with it for awhile I ripped the canvas off of the stretcher and started over.

The second attempt began with a better drawing and a better understanding of what I wanted the piece to be about and how the composition was to work.

As you can see below the final painting varies pretty substantially from the source image photograph.  So I got to do a great deal of invention which is always fun but often risky.  When inventing elements i do so mainly in reaction to what I feel are deficiencies in composition, color flow and conceptual underpinnings.  If I feel that I am not adequately communicating I will try to make myself more clear, without stating plainly what my intentions are.

This painting has references to love and sexuality and how they are intertwined in marriage.  In an era where many people are ambivalent towards matrimony, I see marriage as a wonderful expression of love and commitment that two people make to each other forever. 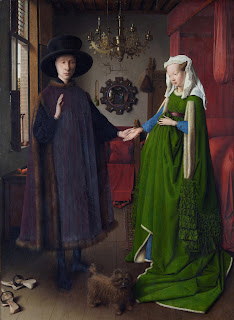 With this painting I thought about expressing companionship visually, using complimentary colors to express the complimentary nature of marriage and partnership.  The green couch on the female side represent fertility while the red couch on the male side represents sexual passion.  I realize these metaphors are rooted in traditional gender roles, but that's the kind of upbringing I had, and I think that there is a lot of beauty to them.

In between the couple is some blankets and pillows that is the marriage bed that bridges the gap between male and female, representing sexual congress obviously, but  sex itself is a metaphor for two people acting and moving as one.

There is more to this painting, but I will stop before I explain away every last stitch of mystery. 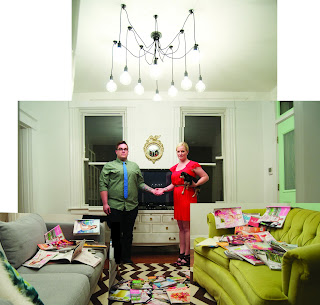 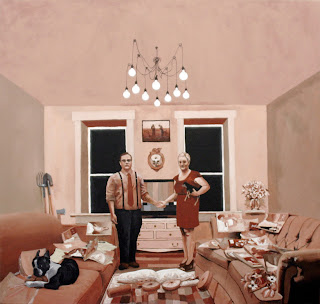 This is the first painting that I have made with an acrylic value painting as the first layer over which I glaze oil pigments.  This was inspired by teaching introduction to painting at Northern Kentucky University and giving a glazing demonstration to my class.  Though I had done this before, It was right around the time I was tearing the original painting off of the stretcher, so I thought I would try it.  The result is very satisfactory, though the glazed aspects will improve on my next paintings.  I do believe though that this is a very good working method, because I can get everything worked out i terms of value before I really commit to certain aesthetic choices. 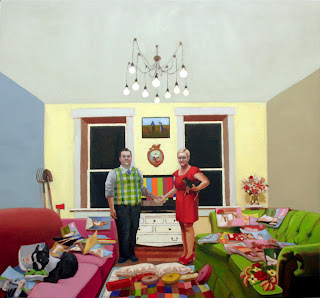 Anyway this is the resultant painting, and that was a little insight into the process of making it.  I hope you enjoy it.

UPDATE
Or at least I thought it was the finished piece.  But after several months I grew unsatisfied with it, my wife encouraged me to work on it, to bring it up to my satisfaction.  so I did.  Then SHE photographed it (she went to the Art Academy of Cincinnati for photography)  so you can see a big difference not only in the over all quality of the painting, but the photograph as well. 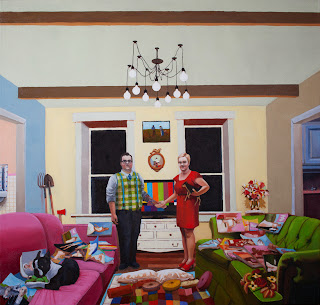 I am much more satisfied with it now.  I'm glad that after several months of working on it that I decided to spend an extra week and fix my issues with it.

Posted by Benjamin Rogers at 11:42 AM No comments: