Just over 1 year ago, I relocated my family to Denver Colorado.  I have just finished my first year of teaching at Red Rocks Community College.  I have been making some things and wanted to update this blog.  The first is a drawing that I finished around Thanksgiving 2015.

Entitled "Breaking the Fourth Wall" this piece is meant to address the viewer directly from a figure in a location that is synonymous with looking.  As if the viewer and gallery attendees are the film that the figure in the drawing is watching.  The phrase "breaking the fourth wall" comes out of Theatre and Film criticism and refers to actors breaking the rationality of the theatrical world and acknowledging or even interacting with the audience (who sit behind the fourth wall).

The space is also meant to communicate the emotional state of the figure.  Surrounded by darkness and emptiness, the figure sits and waits to be entertained by the viewer.  On a technical level, I was interested in creating this piece because of the rich velvety black that I could achieve with the compressed charcoal, and how using middle grays could convey are full value spectrum, even though there are really no whites on the page.  Though i've made a drawings with charcoal during my time as a student, this is really the first charcoal drawing that i've made. 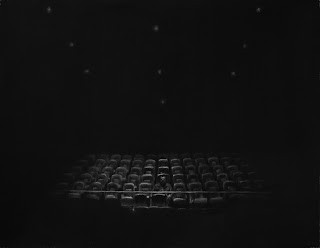 The second piece that I started is an oil painting of ballerinas, paying homage to Edgar Degas.  I started that in November 2016 and have yet to finish it, for several reasons, fatherhood, full-time teaching, unpacking boxes, studio in disarray etc.  Regardless, I think it's a strong painting, but it is continually put on the back burner for projects I get more excited about.  For instance, "Nature, Red in Tooth and Claw" which was actually the first piece that I started after moving to Denver.  It is a watercolor, which up to this point I had never really used for anything other than studies.  I began this in October 2015 and finished it around May 2016.  I'm not 100% sure that i'm satisfied with it yet, but i'm finished working on it. 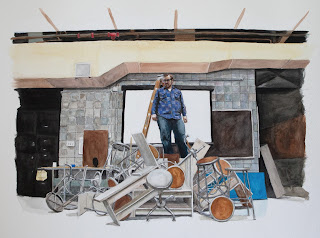 During the process of making this piece, I made another watercolor entitled "What Did I know of Love's Auster and Lonely Offices".  It started as something to break up my time and work on intermittently, but I got really excited about it and eventually it pushed my other projects back so that I could finish.  I took in-progress photos and will publish a post specific to this painting so you can see how it evolved and read about it's meaning.  I am really happy with the result, and in fact, because I like this so much, I plan on working on more and more watercolors. 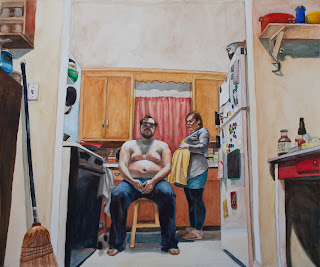 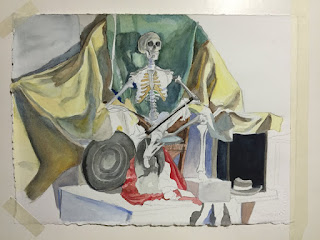 Posted by Benjamin Rogers at 12:26 AM No comments: